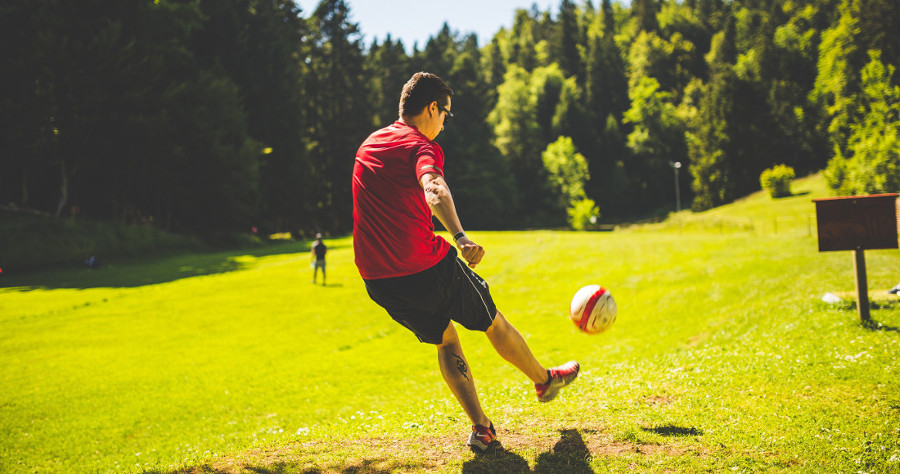 Football, or soccer if you’re reading this in the US, is a great way to get active, build fitness and implement a team sport into a health routine.

There’s plenty of different drills, games and options when it comes to playing the game, but it might come a surprise to many of us that there’s a variety of health benefits associated with the game.

To enlighten you of the benefits of the beautiful game, we’ve compiled a list of 5 key health benefits that you’ll see from playing football (soccer):

Football involves a lot of running around. Different tempos, directions, pacing. As a result, you’re going to building your aerobic capability at a rate of knots and there’s very little that is as good for the lungs as a game of football.

If you’re playing for the full 90 minutes, and say that a third of that is time spent walking then you’ve still got a full hour in where you’re running the pitch. Not only is that a great amount of time exercising, but it’ll fly by with a fun and competitive game.

With shots left right and centre, passing and defending - you’re going to be building some serious strength when it comes to playing football.

Whether you’re tussling for the ball and keeping a strong core or shooting with as much power as possible, there’s plenty of instances within the game that help to build strength, improving your game.

Coordination is vital in football and there’s no better method of improving that coordination than with practice. Coordination is not only great for passing and shooting, but for reflexes and other useful little areas in day-to-day life.

With 22 players to keep track of on the pitch (including yourself) your brain is working at a rate of knots. This quick fire thought process is vital for increased cognitive brain function and the development of concentration, persistence and self-discipline.

Keeping the brain active and increasing cognitive brain function has a variety of associated benefits with research indicating the prevention of some diseases, such as Alzheimer's, with an active brain.

5. Creation of friendships and teamwork

Last but not least is the creation of friendships and the development of teamwork within a squad. This is not only great for the social aspect, but in terms of mental wellness too.

Interacting with those in the same team and having friendly competition with others is a great way to ensure and improve mental wellness. With the release of dopamine from working together and ultimately building towards a win - individuals have been seen to greatly respond from a mental wellness standpoint.

Football has a lot of pros and despite the game being given bad press due to rowdy fans, politics and questionable wages - there’s plenty to be gained from the beautiful game.

Why be social and fit?

Being social and getting fit is not just about the exercise, meeting new people, feeling better improving your physical and mental health every time.

Whant to be notified about events near you? Join free today.

Please tick the Marketing option if you wish to have adverts customised to you.

Make your experience better and accept all?